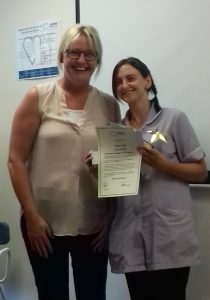 Supreme Home Care has celebrated its greatest number of ‘You’re a Star’ nominations ever. Sue Robson said ‘In the last 6 months we have had 33 clients contact us to tell us that a member if staff has done something exceptional. That’s the most ever and shows the great work are staff are doing. We are really proud of them all.’

Amy Hutchings presented Louise Connelly with the top ‘You’re a Star’ award. Louise was nominated by three of her clients; Mrs Richards said ‘she always goes the extra mile to make sure I’m OK. Nothing is too much trouble and I look forward to seeing her smiley face.’ Mrs Morris said ‘Louise is irreplaceable, thank you for sending her’ and Mrs Roberts told us how supportive Louise has been since she lost her husband. Louise has recently gained her Level 2 award in Social Care and she received a fourth nomination from her Tutor, Liana Clark who nominated her for the effort she put into her studies. 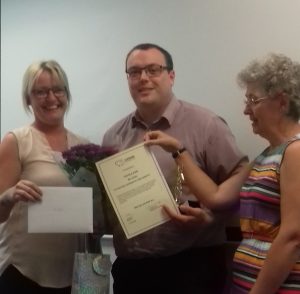 The Company also awarded a ‘Director’s Award’ to Ben Jones the Company’s Rota Scheduler. Ben was nominated by one of the Company’s clients, Ms Warg who said ‘in my time with Supreme Home Care I have always found Ben to be willing to help, and he is always polite and kind. He is always working hard in the back ground trying to please everybody: he’s a wonderful person and deserves recognition.’

The Team award went to Mrs R Evans’ care team in Shrewsbury. She asked for them to be considered because ‘she often forgets and her regular staff tend to do things for her anyway!’

The staff who received nominations were;

There was also a nomination for the Company’s volunteer; Eunice Blackmore

Want to work with us? How to apply

Supreme Homecare staff are ‘professional, diligent, honest and down to earth’